Your Friends You Haven't Met Yet: Pony Ride 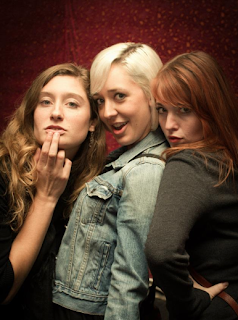 I'd like to introduce you to some friends you haven't met yet: Pony Ride aka Katie Smith, Jessica Spaw, and Alexa Green.


Let's get to know our new friends:

So how did you get starting making videos together?

The three of us all did improv at University of California Irvine (on the team Live Nude People *With Clothes On) together but parted ways once we graduated, it wasn't till a year later after moving each separately to LA, that we reunited and realized the best way to pursue comedy was to make our own content.

We have all studied at the Upright Citizens Brigade and feel that has had a major influence on our writing. Sometimes we write individually, sometimes together, and other times we have a concept and beats but we improv a majority of the sketch. Improv has taught us to ask ourselves when writing "if this is true what else is..." and that can really take us anywhere, which is a lot of fun.

Who are your comedy heros?

We have A LOT of comedy heros since there are three of us the top being: Tina Fey. Amy Pohler, The Mighty Boosh, Ricky Gervias, Carol Bernett, Kristin Wiig, Robin Williams, Steve Martin, Zach Galifianakis.

(I would also like to take this opportunity to mention that former Wisecrack-mentioned comedian, Lauren Lapkus from The Money Kids is now on the best show ever, Orange is the New Black. I think we can extrapolate this data to mean that Pony Ride will have a Netflix Original Series in approximately two years.)

Let us know of a particular story, site, comedian or project: wisecrackzine[@] gmail[dot]com

get your feminist humor theory on

In Stitches: A Patchwork of Feminist Humor and Satire
A Very Serious Thing: Women's Humor and American Culture
Performing Gender and Comedy: Theories, Texts and Contexts